1. Why is Tethering a Dog Inhumane?
Dogs are naturally social beings who thrive on interaction with human beings and other animals. In the wild, dogs and wolves live, eat, sleep, and hunt with a family of other canines. Dogs are genetically determined to live in a group.

2. Do chained dogs make good guard dogs?
No. Chaining creates aggression, not protectiveness. A protective dog is used to being around people and can sense when his family is being threatened. A dog learns to be protective by spending lots of time with people and by learning to know and love his human family.

Leaving a dog on a chain and ignoring him is how to raise an aggressive dog. Aggressive dogs can't distinguish between a threat and a family friend, because they are not used to people. Aggressive dogs will attack anyone: children who wander into the yard, the meter reader, the mailman.

Statistics show that one of the best deterrents to intruders is an inside dog. Intruders will think twice about entering a home with a dog on the other side of the door. Learn more about what makes the best Guard Dog.

3. Are tethered dogs otherwise treated well?
Rarely does a chained or tethered dog receive sufficient care. Tethered dogs suffer from sporadic feedings, overturned water bowls, inadequate veterinary care, and extreme temperatures. During snow storms, these dogs often have no access to shelter. During periods of extreme heat, they may not receive adequate water or protection from the sun.  What's more, because their often neurotic behavior makes them difficult to approach, chained dogs are rarely given even minimal affection. Tethered dogs may become "part of the scenery" and can be easily ignored by their owners.

4. Are the areas in which tethered dogs are confined usually comfortable?
No, because the dogs have to eat, sleep, urinate, and defecate in a single confined area. Owners who chains their dogs are also less likely to clean the area. Although there may have once been grass in an area of confinement, it is usually so beaten down by the dog's pacing that the ground consists of nothing but dirt or mud.

Official Findings on Chained Dogs:
A dog kept chained alone in one spot for hours, days, months, or even years suffers immense psychological damage. An otherwise friendly and docile dog, when kept continuously chained, becomes neurotic, unhappy, anxious, and often aggressive. In many cases, the necks of chained dogs become raw and covered with sores, the result of improperly fitted collars and the dogs' constant yanking and straining to escape confinement. Some chained dogs have collars embedded in their necks, the result of years of neglect at the end of a chain. Chained dogs frequently become entangled in their chains, too, and unable to access food, water, and shelter.

It shouldn’t happen to “man’s best friend,” but it does. Take a drive down many country roads and city streets, and you’ll see them—dogs left to spend their entire lives in “solitary confinement,” trapped at the end of a chain or in a small pen.

We can’t think of a crueler punishment for these social pack animals who want—and deserve—companionship, scratches behind the ears, walks around the block, and the opportunity to curl up at their guardians’ feet at nightindoors.

Kept “out of sight, out of mind” in the back yard, chained dogs are often deprived of adequate food, water, and veterinary care—in addition to having their emotional and social needs completely ignored. Many are denied proper shelter and have nothing but an overturned trash bin or plastic barrel—or nothing at all—to shield them on freezing winter nights. Countless chained dogs have frozen to death during cold snaps or died of heatstroke on sweltering summer days.

Chained dogs are also totally vulnerable to other animals and cruel people, and many chained dogs have been stolen, set on fire, shot, stabbed, tortured, or poisoned by cruel passersby or neighbors who were annoyed by their barking.

Given these cruel living conditions, it’s no surprise that chained dogs often become aggressive and attack children or other people who approach them. Chained dogs are more likely to bite because they are usually unsocialized; their living space is reduced to a few square feet, which heightens their territoriality; and they don’t have the option of escaping during a confrontation. Many communities across America and beyond have learned the hard way that not only is chaining dogs an animal welfare issue, it’s also a public safety hazard.

The most effective way to help hundreds or thousands of neglected dogs in your area—as well as prevent dog attacks—is to work with city or county legislators to ban chaining. You may be dogs’ only hope for a shot at a better life.

How can you help?

Make your community a safer place for both dogs and humans. Read the laws that have been passed by other communities, see what officials in those communities are saying about their laws, and get started on changing your area for the better! Help break the chains.

Many counties and cities have laws addressing chained or penned dogs. See the list of such places click here   http://www.peta.org/issues/companion-animal-issues/cruel-practices/chaining-dogs/current-legislation-tethering-dogs/

or look up your local law at the library or on Municode.com. Even if your area doesn’t have such a law, backyard dogs must have shelter, adequate food, and clean water, and they must be provided with veterinary care if they are sick or injured.

​Law enforcement officials are unlikely to remove dogs from such situations unless their lives are truly in danger. Err on the side of safety, of course. But unless you’re unwilling to work with the dog’s guardians or you’ve already exhausted that option to no avail, don’t call authorities for non-emergency backyard dog cases—the dog probably won’t be removed from the situation, and the guardians will be less likely to allow you to visit or help the dog.

Work With Guardians to Help Backyard Dogs in Non-Emergency Situations. Your best chance of helping dogs in non-emergency situations is probably to befriend the dogs’ guardians. Using anything other than a polite approach will probably make them angry and hurt your chances of making a difference. You may be pleasantly surprised—sometimes guardians help their animals themselves after just one conversation.

1. What is meant by "chaining" or "tethering" dogs?
These terms refer to the practice of fastening a dog to a stationary object or stake, usually in the owner's backyard, as a means of keeping the animal under control. These terms do not refer to the periods when an animal is walked on a leash.

“In which states is it illegal to chain or tether your dog?”

Photos on this page courtesy of Amy Stubbs

Thank you Amy for your beautiful photography. Your photos bring a visual emotion and tell the story... 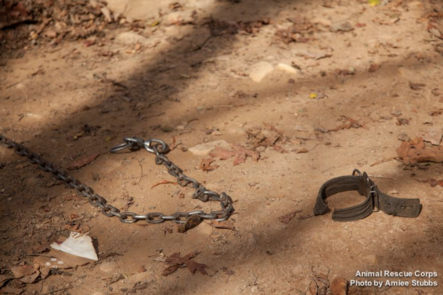