You could probably trace the beginning of bully bias back to the 1980s, when gangs began using pit bull breeds for protection or as status symbols. According to the ASPCA, another probable cause is the media's misidentification of dogs involved in attacks. One often overlooked fact is that any dog may attack if it's neglected, abused or trained to be aggressive.

Bully breeds are normally gentle dogs when they're cared for properly, and they have many qualities that make them great pets for active people with lots of time to give. They are very social and extremely loyal to their owners. Thanks to their athletic bodies and exceptional intelligence, they are very energetic and generally excel in agility. Believe it or not, bully breeds are very good with children, too. As with any dog, you should supervise bullies when they're around strangers, children or other pets. There's no doubt bully breeds have been given a bad name, but many animal lovers are dedicated to restoring their image and proving they deserve to be among America's favorite dogs again.

What's in the name?

The term "bully" can invoke a sense of terror and intimidation, so it's no wonder many people believe these breeds pose a danger to society. However, the term actually has nothing to do with the dogs' temperament or behavior, and everything to do with their origin and history. Bully breeds all come from the same root stock called Molosser, which is a breed that originated in ancient Greece. Molossers were big dogs with large bones and muscles, pendant ears and short muzzles. The bullies that we know today were created as a result of Molossers combining with other breeds, like the Old English bulldog or mastiff breeds. Though they were originally bred to protect livestock and property, some breeders and owners began to use the dogs for other, unsavory purposes. For example, during the 19th century in England, they were used in blood sports like bull baiting, and some believe this is where Molosser descendents first came to be known as "bully breeds." 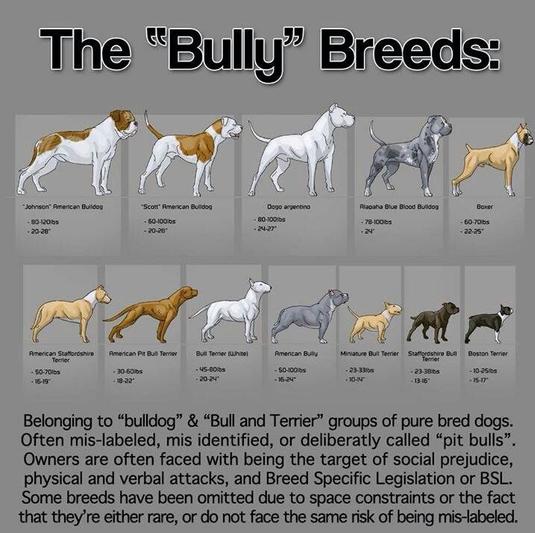 The term bully breed is simply a term to classify bull dog type breeds. There are several dogs that are sometimes labeled as bully breeds. Here is a small list of those breeds: